Annapurna circuit trek is one of the classic and most popular treks located in the middle part of Nepal. You will make a circuit to whole Annapurna Mountains with stunning views so it has been a prime choice of many international tourists for Nepal holiday. Annapurna circuit trek is easily accessible trek which begins after a drive from Kathmandu through the village with the traditional farming terraces.

The trek gradually goes up following the Marshyangdi River and gorge till Throngla pass (5416m), then after it descents to western part. You will trek through the villages with the traditional farming terraces looking some time snow-capped mountains from your step. Likewise you will pass the evergreen forest with the seasonable flowers that will add more pleasure in your Nepal holiday.

You can see many snow covered mountains from the beginning of Annapurna circuit trek to the ends like Annapurna two, Annapurna three, Tilicho, Dhaulagiri and others. You will see the different landscapes before and after Throgla pass, as you can see the spectacular views of white mountains before the pass whereas the landscape like Tibet will be new scenery after pass that you can distinguish from the top of Throngla pass. Though there is road under construction you can follow the foot path or classic trail.

Upon arrival at Kathmandu International Airport transfer to your hotel in Kathmandu or Bhaktapur. A short briefing will follow concerning the necessary formalities and your Annapurna Circuit trek itinerary. Depending upon your arrival time you may spend free time visiting nearby sanctuaries or resting.

Half day sightseeing around UNESCO Bhaktapur / Kathmandu where your guide will escort you on a tour of Buddhist and Hindu temples and shrines reflecting ancient local traditions. There is time to explore the city’s many places of interest on your own or take a rest while trekking permits are finalised. In the evening sample a delicious traditional Nepali dinner. Overnight in Kathmandu.

Breakfast. Our trekking guide will come to the hotel at 07:00 hrs to pick you with private transport to leave for Besi Shahar (185km) and will take us about 6 hours. Along the journey you will witness some spectacular scenery of white mountains, green hills, rivers and hamlets. We overnight at a guesthouse.

Our first day’s trekking introduces us to the diverse cultural elements of Nepal and we pass by many typical local houses and the faces of varied ethnic tribes exchanging greetings (Namaste) as we pass. We will share the trail with mule caravans that transport supplies to the remote villages. Our route makes its way through subtropical forests and the rice terraces of Sera to the village of Khudi (840m). After we pass the village of Bhulbule we will see a majestic 60m high waterfall. Along the way we have views of Manaslu (8156m). The mountain views disappear as we come closer to the small town of Ngadi, here we will have to cross the Ngadi Khola by a long suspension bridge. From here on the trail moves gently upwards to Bahundanda, an attractive village in the saddle of a long ridge at 1300m (7 hrs).

We start the day by descending on a steep slippery trail past amphitheatre-shaped rice terraces. There will be a small hot spring after this descend. The rest of today’s trek will have us pass the river a few times and we will see a few waterfalls as well. As we near the village of Jagat we will have a steep 200m climb to a trail that has been blasted out of the rock face. 15 minutes below this village we can visit another small hot spring. From Jagat we climb up to Chamje (6 hrs).

Today we will do the 940 meter ascent to Bagarchap through bamboo and rhododendron forests, on a trail high above the river bank. We will pass the village of Tal at 1700 meter which lies at the foot of a large waterfall. The trail crosses a broad, flat valley that was once a lake (Tal means lake) after which we will cross the Marsyangdi by a 60 meter long suspension bridge. The trail will climb up from a second suspension bridge to a stone kani (an arch over the trail) which marks the entrance to Dharapani at 1960 meter. All old villages from here to Kagbeni have these arches and they become more elaborate and picturesque as the Tibetan influence becomes stronger. The trail slowly climbs from here on through a forest of blue pine, spruce, hemlock, maple and oak to Bagarchhap. This is the first village on the trek with typical Tibetan architecture: closely spaced stone houses, with flat roofs piled high with firewood. (7 hrs).

We will first follow the south bank of the river climbing to Syal Khola (the river of jackals) at 2210 meter, after which we will cross the river over a cement bridge near a spectacular waterfall. The route crosses several landslides as it works its way uphill through a walnut tree forest and aside apple orchards until we arrive at Chame. At the entrance of the village is a long wall with many prayer wheels. Throughout the day there are nice views of Lamjung Himal, Annapurna II and Annapurna IV (7525m) (6 hrs).

We will first pass the older part of Chame and climb up to Telekhu at 2840 meter and continue with a long pleasant and mostly level walk through the forest to Brathang, which lies at 2950 meter. After the trail rounds a bend here we will see the first view of the dramatic Paungda Danda rock face, a tremendous curved slab of rock rising more then 1500 meter from the river. We will cross back to the south bank of the Marsyangdi on a suspension bridge at 3080 meter and then make a long gentle climb over a ridge through blue pine forests. After this the trek will be reasonably level as it heads to the upper part of Manang valley to Pisang. This town marks the beginning of the region known as Nyesyang, the upper portion of the Manang district (5 hrs).

Today our trek will slowly climb up to the Tibetan-style village of Bryaga at 3500 meter following the valley floor. At Bryaga we will see houses stacked one atop the other, each with an open veranda formed by a neighbour’s rooftop. The gompa, perched on a high crag overlooking the village, is the largest in the district and has an outstanding display of statues. We then continue through a very arid countryside, dominated by weird cliffs of yellow rock, eroded into dramatic pillars alongside the trail to reach today’s destination, the village of Manang, where the shops are surprisingly well stocked with all the things you might want to refuel on (5 hrs).

Today we stay in Manang where we can do a short hike to ascent slightly higher to for instance Khangsar, which is a 200 meter ascend. It is important to have a relatively restful day today, to allow your body to acclimatize to the higher altitudes and thinning air. It also gives us the possibility to wash some of our clothing.

Trekking slowly upwards to Thorung La we will leave the large trees behind and see vegetation consisting mainly of scrub juniper and alpine grass and we will pass a few meadows where horses and yaks graze. After we reach Yak Kharka we will see herds of blue sheep grazing the steep slopes as well. About an hour after passing Yak Kharka we will arrive at Letdar (4:30 hrs).

Again a relatively easy day to get used to the altitude before we have to cross the highest point in the trek, and possibly the highest point you have been on in your life. From Letdar we will continue to climb along the east bank of the Jarang Khola to Thorung Phedi, a rock-strewn meadow surrounded by vertical cliffs at 4420 meter. Blue sheep and even snow leopards can be sometimes seen in this valley. High in the skies above us we can see lammergeyers and Himalayan griffons circling around (3-4 hrs).

Today is a long trek starting before sunrise at maybe 04:00 hrs to reach the pass by 09:00/10:00 hrs at the latest, as otherwise weather conditions will greatly affect the journey. We cross over at an altitude of 5416m so can be exposed to strong winds if crossing too late. Local people have used this trail for hundreds of years to bring herds of sheep and yaks in and out of Manang. Thus the trail, while often steep, is well defined and easy to follow. Snow can block the pass at any time of the year if there has been an unseasonable storm. It takes from four to six hours from Thorung Phedi to the pass, but the many false summits mean the climb seems to go on for ever. At the Thorung La pass, with its traditional prayer flags and stone cairn we will have outstanding views. You can see the Annapunas, Gangapurna and Khatung Kang, a heavily glaciated peak. Amazingly there is a teashop here on top of the pass at 5416 meter. From here we start a long descend of about 1600 meter with outstanding views of Dhaulagiri mountain standing alone in the distance across the valley. After the trail becomes less steep we will enter grassy fields and cross meadows to our final destination of Muktinath, which means place of Nirvana and is home to the Muktinath temple as well as several monasteries. It is said that all sorrows you feel are relieved when visiting the Temple, which is a scared pilgrimage site to both Hindus and Buddhists. The main pilgrimage normally takes place in September. The Temple is dedicated to Lord Vishnu and has 108 waterspouts around it from which Holy water pours. Another attraction nearby is the Jwala Mai Temple and this contains a spring and an eternal flame fed by natural underground gas (9 hrs).

From today we will follow the “Jomsom trek” in reverse order. We will first make a 990 meter descent through meadows, streams and fruit orchards down to Kagbeni, a fascinating medieval village infused with Tibetan culture. Then we will continue going down the Kali Gandaki gorge to Jomson (more correctly Dzongsam, or “new fort”).

Fly to Pokhara and spend the day at leisure, relaxing, and maybe enjoying a massage or enjoy sightseeing around Pokhara valley. Overnight in Pokhara.

Day 16 : Fly or drive back to Kathmandu. 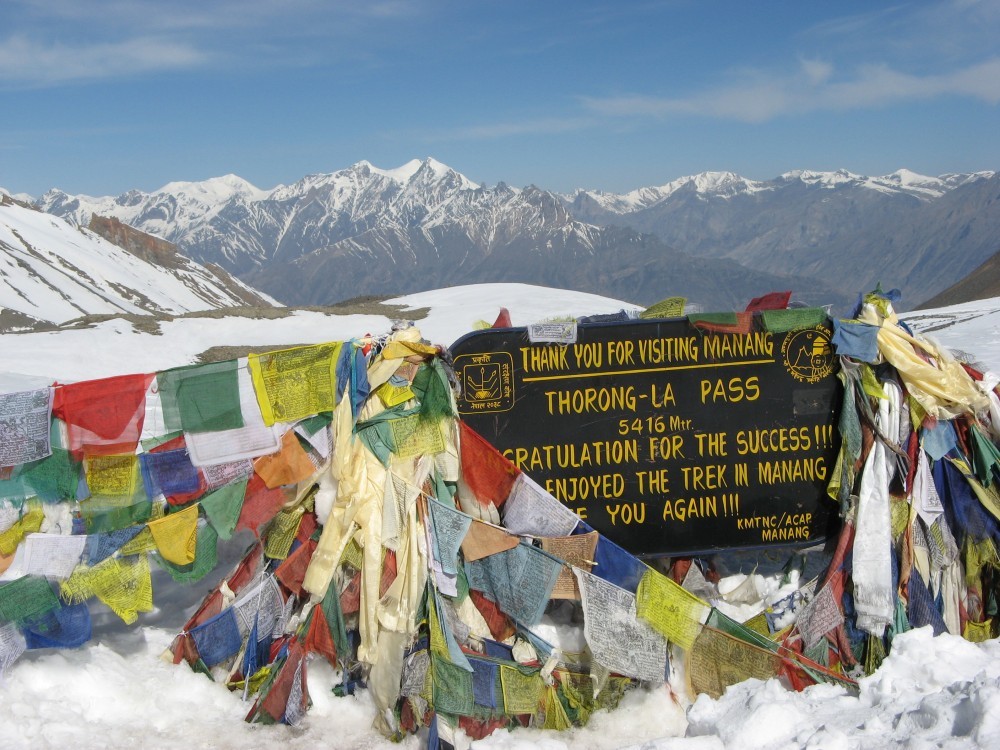 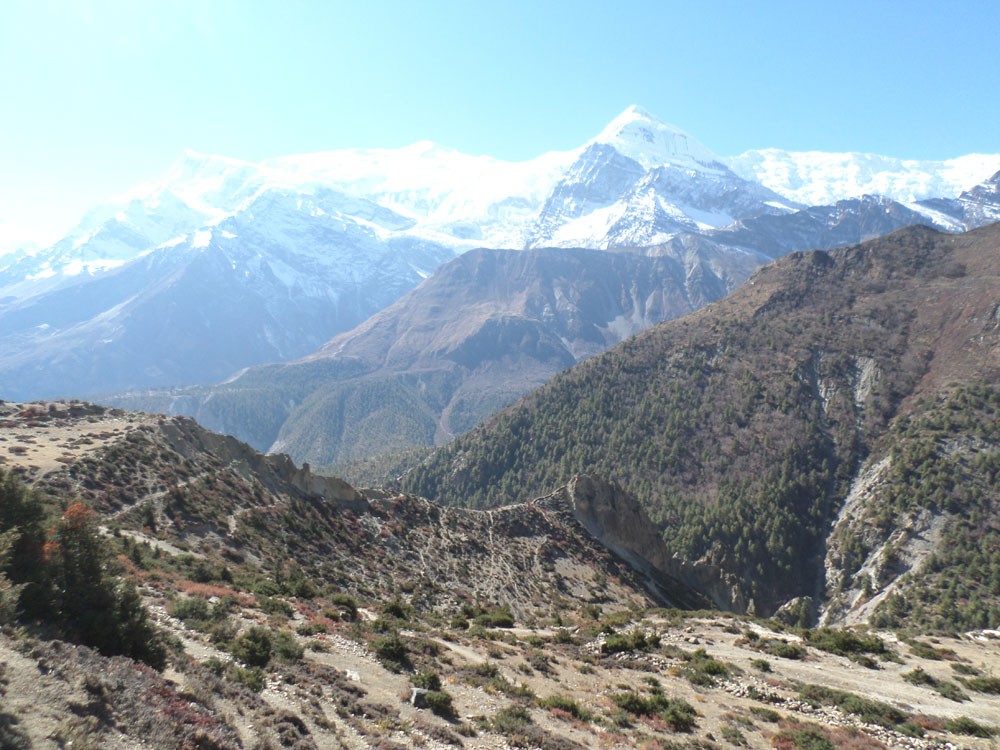 Powered by A Falling Leaf Inc.